Ever since it was founded by Michael Brooks 8 years ago, Masterpiece Models has been on a permanent and enduring task to find smart ways of upgrading its models. The launch of ScaleSeven wheels on the Britannias and Clans was a breakthrough enabling modellers to buy top grade models with much more accurate wheelsets for a small premium (since abolished on all current Masterpiece production).

At the time that we introduced these wheels Michael consulted the late Geoff Holt about this change.  Geoff, one of the finest model makers of our time, quickly replied “the wheels look fine at the front, but what about the back and the sides?”  At that time I was working with Michael on the Britannia and Clan wheels, and we knew that 360 degree machining was a complete non-runner with our builders. We even had a big problem getting the builders to machine the Britannia and Clan wheels sufficiently flat. I told Michael that of course Geoff was right, but it was a bridge too far - we would never get it done in Korea.

Geoff’s comments never left my ears and when I took the helm at Masterpiece Models I thought we should do something about it. It was then that I was introduced to Tony Wall.  Tony rang me one day and said he would like to buy a Masterpiece Models’ locomotive in ScaleSeven. In the course of the conversation Tony said that his company Allendale Components was a UK manufacturer of scale model railway wheels as close as possible replicas of real wheels from the works drawings. His wheels covered 7.5” gauge down to ScaleSeven. He kindly sent me some samples, which when I received them, were as close replicas as possible to the real thing, machined 360 degree brass centres in stainless steel tyres. In short, I was blown away by their perfection. They were exactly what Geoff had said that we needed when we put ScaleSeven wheels on the Britannias and Clans.

When I received the wheels I called Tony immediately. Could he please make sets of wheels for Masterpiece Models’ current and future production? Yes he said, but he was limited in his production capacity and the wheels were not cheap to produce. So we agreed as first step we would make 16 complete sets of later 'Castle' 4-6-0 wheels in ScaleSeven. 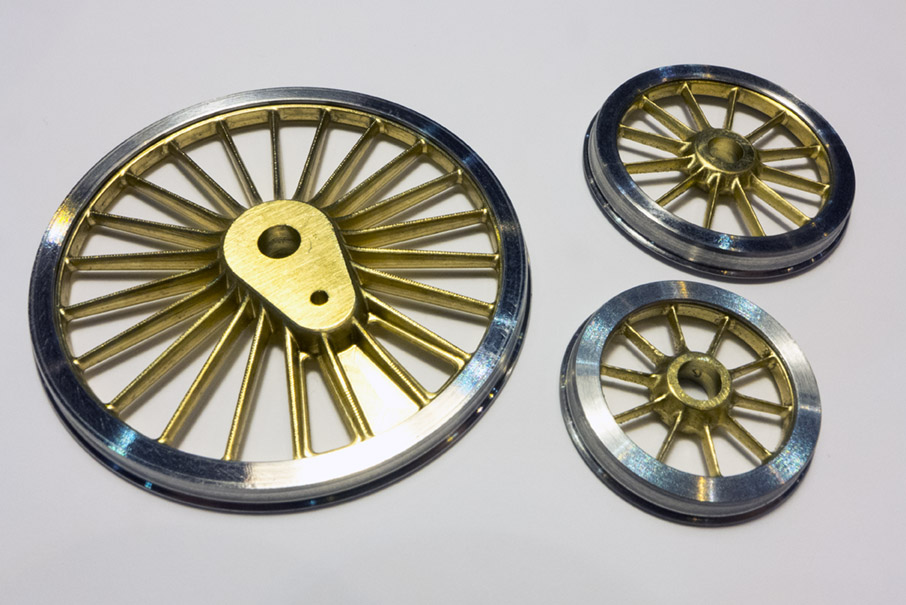 What you see here is a complete set of wheels in ScaleSeven for one of our 70XX Castle models. They are machined from solid on both sides and that the first thing that is noticeable is that the spokes are much, much finer that the wheels we use in our standard production.

Now you will ask how much will it cost to fit these wheels on a 70XX Castle. The answer is they are not cheap. They will, in fact, attract a premium of £600 over the standard wheels and they are only available in ScaleSeven. However, we believe that for the modeller who wants the best they represent a good investment. So what we will do is to offer a limited number of our future locomotives in ScaleSeven for both collectors and modellers alike to give them the opportunity to buy the best for a modest premium.

For the more cost conscious customer we will continue to offer both O gauge and ScaleSeven models with our standard wheels at a lower cost with no premium for ScaleSeven.

We believe that Superwheels will further enhance our current and future models, taking them into a new quality league. It is part of our commitment for continuous improvement in all our models.