The visit was a bit of a whirlwind event with virtually no spare time despite being there over the weekend. Helped by the BA B787 Dreamliner (non-Business Class) flight I was able to walk straight off the aircraft into the factory office for 10 hours of meetings. What a great aircraft it is from a passenger viewpoint! 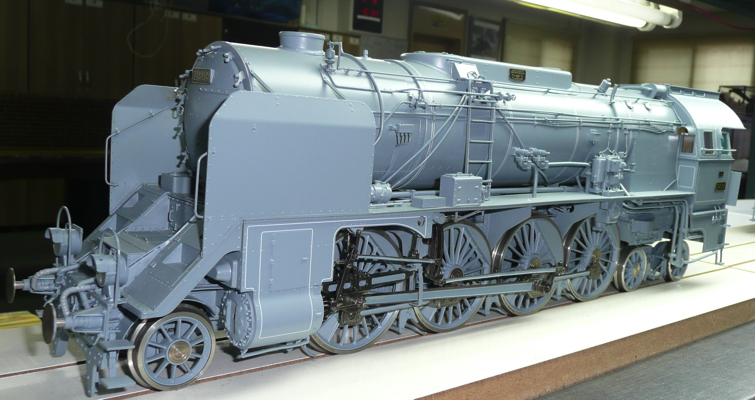 We spent the next two days reviewing in detail over 100 items of commentary/change on the 45XX/4575 models. The Builders were most helpful and keen to upgrade the detail on the models. Thanks to our expert panel’s copious input, we were able to resolves all but 5 issues. These required additional information that in turn needed extra photos. While I was in Korea my colleague Adrian Knowles very kindly visited Didcot and provide a host of new pictures giving amazing detail of the chassis and body of a 55XX resident there. The builders now have all this information and the changes will be incorporated into the final build.

The 4575 sample model was about 60% complete not yet ready to bring back to the UK. The builders will try to incorporate the agreed changes and have it ready as a painted model at the end of March. So I regret to report that the model will not be available for exhibition at the Kettering Show. As soon as it is ready we will publish photographs on the website.

A key part of the purpose of the visit was to fix the production programme and the number of models to be produced. There has been a huge amount of interest and orders have been steadily flowing in since we received the sample 45XX model. As a consequence of this development and a large amount of interest in a wide range of different variations, we have decided to increase production from 120 to 170 models. The planned split is for 90 45XX models and 80 4575 types. We will put on the website details of the planned production programme including the choice of liveries which will shortly have to fix if we are to meet the target production date of end June 2016 availability. In choosing the schedule we have tried to accommodate the requests we have received from you all as best we can. We hope you will understand at the price we are offering these models for a much upgraded specification, we cannot make 170 completely different individual models.

We will be contacting everyone who has made a reservation to ensure that we are building a locomotive that meets individual essential requirements.

70XX Castle
The second half of the visit was spent on the 70XX Castle and the other GWR Tender engines. We went through in extensive detail a large number of changes that are required for the 70XX compared to the earlier 50XX Masterpiece Model build. This amounted to over 50 changes, a remarkable amount, far exceeding my initial expectations. As the builders are already very knowledgeable on the Castle locomotive, they have a much better understanding of all the changes than expected. On the few early GWR build models in late GWR livery we now will be able to offer the option of the rounded top inside cylinder casings.

On both the Collett 4000 gallon and the 4000 gallon Hawksworth tenders we identified several important detailed changes to make the tenders as accurately as possible. This included fitting extra items and repositioning of some key items to make them as close as possible to the originals.

For the chassis there were many detail changes and significant changes to the mechanical features. We will fit split axles to replace the previous plunger pick up system. Also a new strengthened gear box based on our existing excellent enclosed design will be installed as well as a new (much more expensive high technology) motor. We also agreed to tighten up all clearances on the crankpins/valve gear and the front axle end-float so that models (in both O gauge and Scaleseven) will have better significantly running performance. 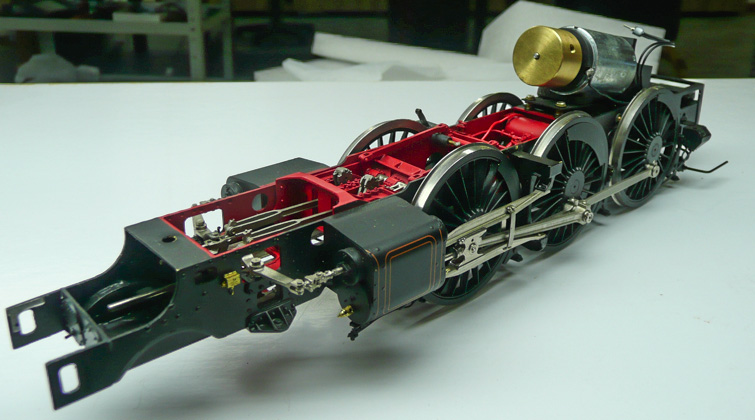 Soon we will have to fix the total allocations of O gauge and Scaleseven to the build programme, so customers will need to think through fairly quickly as to which gauge they want as the target is to deliver finished models by the end of July. We plan to fix the Castle production programme within a few weeks. Once this has been done the ability to juggle the progamme to accommodate changes becomes much more difficult. This is the consequence of producing a quick run of superb locomotives within a much shorter time period.

The builders have promised a sample model by the end of April. We have selected a double chimney variant here as this will be the first time that Masterpiece Models has produced this type. As soon as we have the sample we will publish extensive photographs of it on the website.

We would like to thank all of you who have made reservations for the Castles, demand for which has far exceeded our expectations, especially for Scaleseven versions. So if you are interested in a more accurate model, especially if you do not already have an O gauge layout or do not intend to run the locomotives on someone else’s O gauge layout, that is essentially you are a collector, I would urge you seriously to consider a Scaleseven version. We will be able to provide you with a section of S7 hand-built track on which you can place your locomotive on display.

If you are already an O gauge modeller especially if you have a layout then probably the best way forward is to stick to O gauge. Masterpiece Models’ locomotives in O gauge still look very good!

Other GWR Tender Locomotives
We discussed changes to the detailed drawings already produced by the builders and other key features of the build. The fact that there is a high degree of commonality between these engines and the Saints from an earlier Masterpiece Models build is very helpful to the making these locomotives. Once the Castle programme is underway we will press ahead with these tender engines. A key part of the future decision is whether to build these locomotives as a sequence i.e. following each other or in parallel i.e. running all build programmes simultaneously.

Other Models
We could not resist ending this report with a picture of them superb 8 cylinder vintage Bugatti car chassis made by our builders. Quite simply it is one of the finest models of any item that I have ever seen.

I hope the model shows just how good our builders are at making other models!