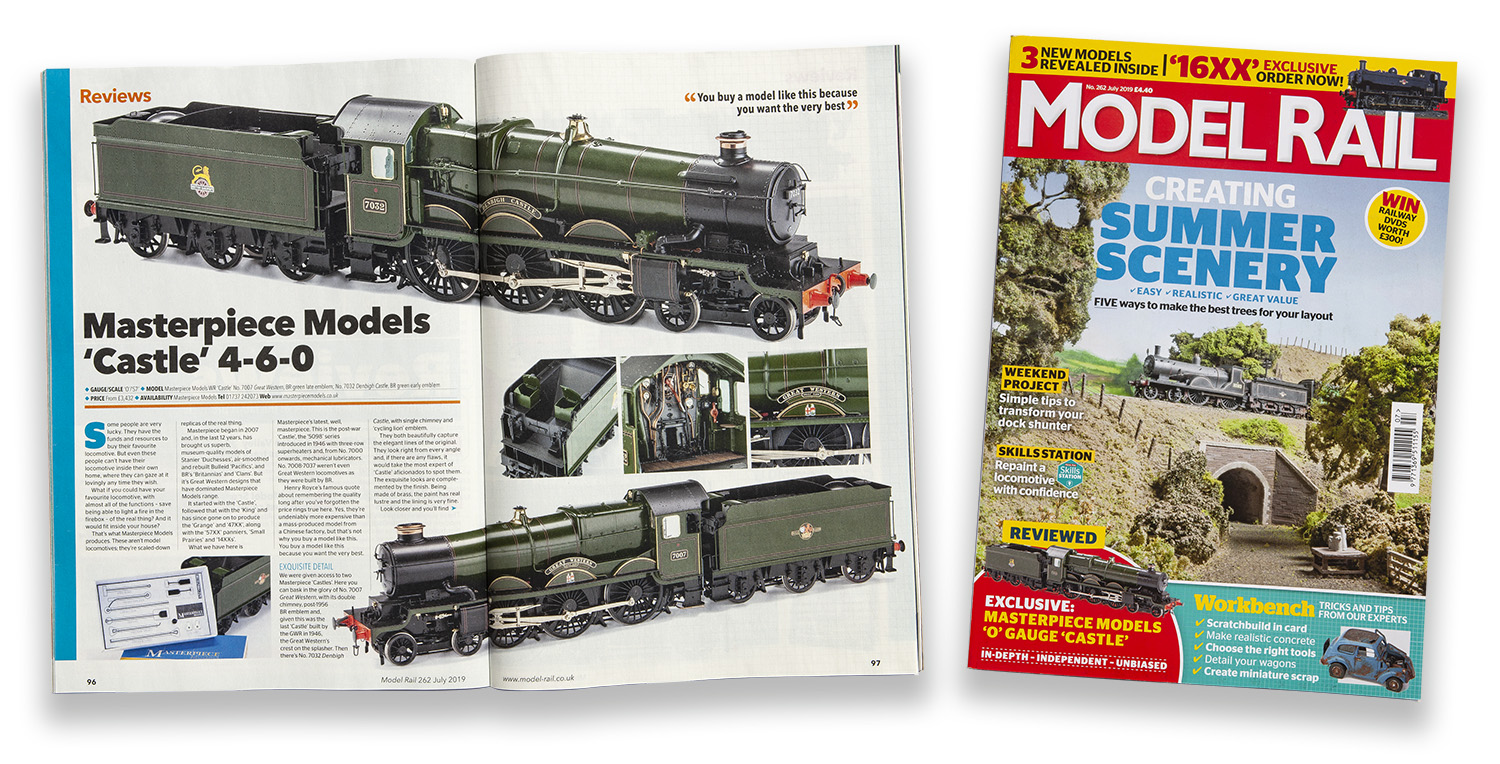 So says Richard Foster, editor of Model Rail magazine who has reviewed our 70XX ‘Castles’ in the July issue (No. 262).

Thanks to our chief engineer Bob Meanley and the builders – especially Mr Kwon – we think they really capture the look of the real engine. Now we have an independent review from an eminent modeller who is clearly impressed. Richard subjected two locomotives to Model Rail’s critical scrutiny – original condition single chimney 7023 Denbigh Castle in finescale 0 gauge, and double chimney 7007 Great Western in Scale7 fitted with Superwheels.

His assessment? “These aren’t model locomotives; they’re scaled-down replicas of the real thing.” He goes on to describe the performance: “These models aren’t just for mantlepieces – they’re designed to work. The motor is what Dave Lowery describes as “the most powerful around.” Denbigh Castle performed superbly on Dave’s layout, handling heavy trains of brass rolling stock with ease.”

The Model Rail photographer has taken some terrific pictures to go with the review, so I do urge you to pick up a copy. As well as the review, the issue is packed with interesting features on models of all scales, plus plenty of helpful ‘how-to’ advice.

Doncaster Show
First a big thank you to all who visited our stand at the Doncaster Show. I hope that none of you were put off because we were very busy at some times. At least you had a chance to look at a non-GWR MM locomotive – the Standard Class 5 first sample model. We are now also working on the LMS/BR 7P Rebuilt 4-6-0s and we hope to get these started as soon as the ‘Halls’ and 28XXs are completed.

LT Panniers
We have now sold all our LT Panniers including the Scale7 one I had hoped to keep for my own layout. The demand for these models has significantly exceeded all our expectations, so we are considering making a small batch of additional engines. If you would like an LT engine please do contact us soon as we expect them to go quickly.

Despatch of Locomotives to Non-UK Customers
We have now set up the export courier account for despatch of models to non-UK customers. So we are gradually working the models into finished condition and will contact you individually as soon as they are ready.